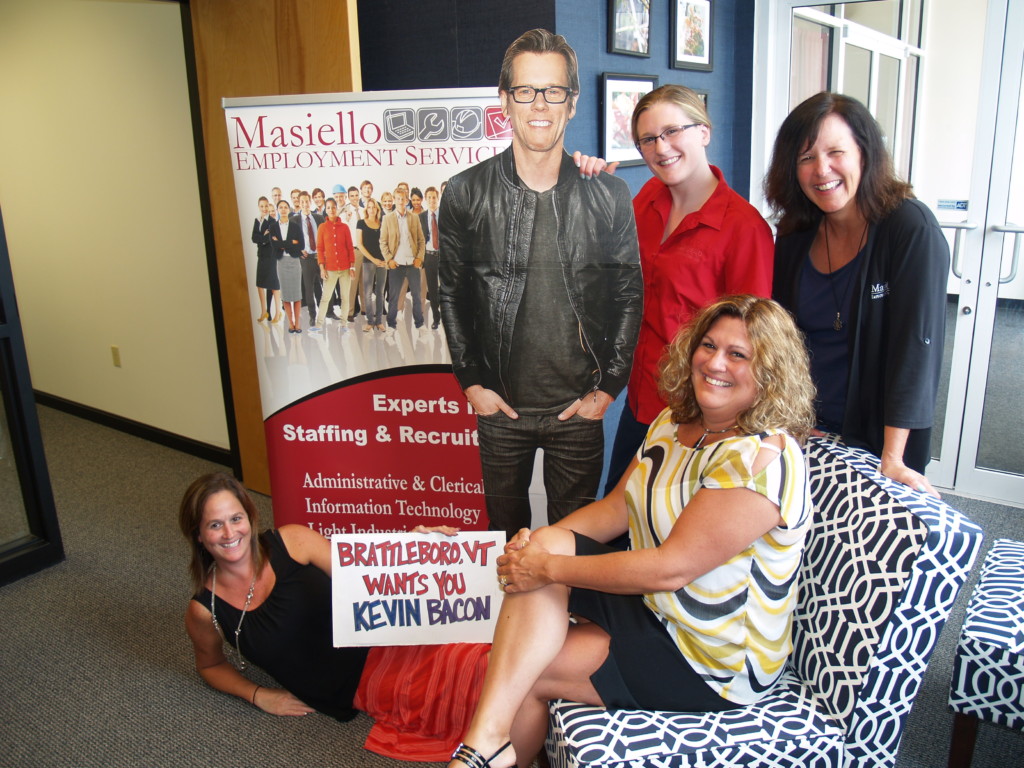 As many of you know from our previous blog about the Brattleboro Bacon Fest coming up soon in September, the Team at Masiello Employment are publicly joining the Brattleboro Chamber of Commerce pleading for the one and only, Kevin Norwood Bacon, to join in on the fun! 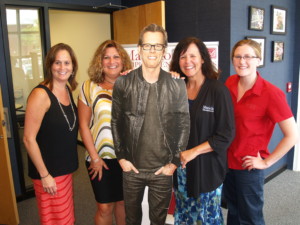 Here you see the Masiello Team here having a little fun with the idea, and all had many, many great Footloose flashbacks.

Sure, this is one-dimensional Kevin Bacon, and he lacks in personality somewhat over the real thing (it was really hard to get autographs), but we had a ton of fun meeting Kevin, live and in person for our little photoshoot with the good folks at the Brattleboro Chamber. Together, we are still fiercely crying out for Mr. Bacon’s presence at Bacon Fest. 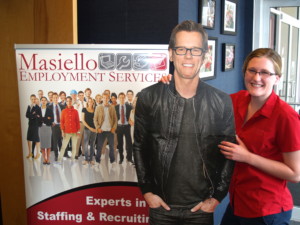 Says Masiello Employment’s own Director of Operations, Julie Pearson, on her recent experience with Kevin, “He did not have much to say, was a bit one dimensional and smelled like a pizza box, but is a snappy dresser who is still quite handsome for his age!”

So here’s to hoping for the real thing – Kevin if you are out there – Vermont (and New Hampshire) still wants you!

Most of you are likely familiar with the 6-degrees-of-kevin-bacon game, but if not – here’s the scoop. Tody was our day to make Kevin a number one connection, One-Dimensional that is.

As an aside from all the fun, Kevin was kind enough to take the six-degrees game and spin it into a philanthropic endeavor that you should check out: http://www.sixdegrees.org/. The organization uses star power to connect for good causes.

So help us out! Be sure to share, retweet, and call out the man, the myth, and the legend, himself, and ask Kevin Bacon to join us in Vermont! And let us be social professionals here to do so by using his Twitter, let’s not invade in his personal life (just yet.) Kevin – if you are out there – join us at Baconfest or just give a shout out to your fans at Masiello Employment!

You can read more about the effort to get Mr. Bacon on his way up North in this article from the Keene Sentinel.