Why Now Is The Right Time to Google: Manufacturing Jobs Near Me 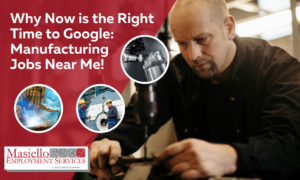 Masiello Employment Services places qualified workers in Direct Hire, Temp-to-Hire and Temporary jobs every day. As a top staffing agency, we know how hard it can be to consider a new field to work in. Manufacturing jobs offer quality positions and long-term careers. Here’s why it’s the right time to Google: Manufacturing Jobs Near Me!

Reason Number One! Wages and Benefits

According to the Economic Policy Institute, manufacturing workers make on average 13% more than in comparable jobs in other industries. The manufacturing positions Masiello Employment Services is currently filling are in the $15-$24/hour range.

For example, an Assembler may make $15+/hr. But this position also includes a comprehensive benefits package including health/dental/life/disability insurance, 401k plan with company match, paid holidays and vacation, as well as a Flexible Spending Account. Salary positions range from $50,000 to $100,000 and also offer competitive benefit packages.

Some Americans fear losing manufacturing jobs to robots or overseas. Carolyn Lee is the Executive Director of the Manufacturing Institute, which is a nonprofit workforce development partner of the National Association of Manufacturers, explains this is partly due to “a perception problem. People don’t know that jobs are here or that these are jobs they want.”

The integration of technology hasn’t replaced the American worker. Rather it has made the job less physically demanding with higher pay to more workers with degrees, certifications and higher skills. Many companies will even provide training. The Deloitte and The Manufacturing Institute study notes that humans are still needed to manufacture the majority of goods, even with an increase of 2.7 million robots worldwide.

Carolyn Lee states that “it’s mathematically impossible for us to compete in the future without having a more diverse workforce,” and that “manufacturing has traditionally been older, whiter, and more male.” The Deloitte study shows that women make up less than one-third of employed manufacturers and that one-fourth of women currently holding manufacturing jobs may change careers.

A local New Hampshire Machinist with more than 20 years in the field explains that, “while the majority of manufacturing jobs are filled by men, there is no reason why a woman could not do my job.” He reports to spend half of his time working on computers.

He says, “Machinists’ jobs were more physically demanding but this changed with computer-controlled machines and automated equipment.” Carolyn Lee reiterates this on a national level, saying that “people think it’s a stationary, low progression and low-knowledge industry. And that’s not the case.”

In 2019, the Bureau of Labor Statistics (BLS) found that there were 362,000 new hires despite there being 469,000 jobs available.  With integrated technology in manufacturing jobs resulting in specific skills in demand, there is a concern that millions of positions will go unfilled.

The demand for manufacturing workers has consistently increased since 2010, even throughout the pandemic, according to FRED Economic Data. This can be attributed to improved systems, such as Six Sigma which decreases errors and increases quality, Computer-Integrated Manufacturing (CIM), robotics technology, and automation. That’s why now is the time to Google manufacturing jobs near me. Masiello Employment Services is here to help you find the right match. 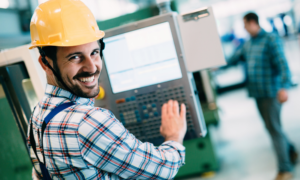 The Future of Manufacturing

According to CNN Business, U.S. manufacturing has “surged to a 37-year high.” However, there are still “more than half a million job openings.” This includes skilled jobs such as machinists and welders as well as entry-level jobs that only require a high school diploma.

If you’ve never considered a career in manufacturing, here’s another element to think about. Developing skills in manufacturing can lead from wage to salary positions, such as middle-skill jobs like Machinists, Engineers, and Maintenance Technicians, which require training, licensing and certification.

It is tough to navigate this changing world, and finding the right fit for your next job is what Masiello Employment Services can help you with. We are experts in available, local Direct Hire, Temp-to-Hire, and Temporary jobs. Check our job search to find these job listings and many more!