Halloween Candy – the Best and the Worst! 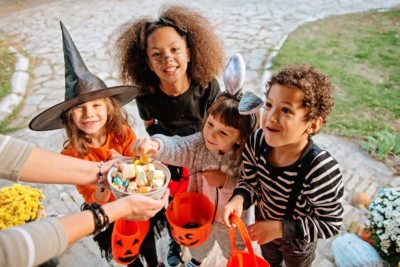 It’s time for Trick-Or-Treating! What better way to spend a chilly late October evening than consuming copious amounts of candy just before bedtime! Adults, you can’t fool us – we all know you sneak a few of these magic morsels for yourself (or buy your favorite at the store to hand out!)

So, this begs the question – what are the absolute best (and worst) Halloween Treats? Those that genuinely make your taste buds sing? We all have our favorites, but there is a consensus out there regarding some of the most fabulous bite-sized candies every invented.

For example, Julie from our office adores anything Reese’s (and we mean anything) but gets a major frown on her face when she gets a boring old apple – or even worse – a toothbrush (womp, womp…).

Then, If you ask the internet (thanks, Thrillist.com), the best candies are as follows:  Reese’s Peanut Butter Cups (Julie is so on the money with that one), followed by Twix, Snickers, KitKat, and Butterfinger.  But yes, there are some homemade treats that also score big (think Rice Krispy Treats) not represented in the data!  Some even boil it down to favorite’s by state (Starburst, NH? Really?)

Mental Floss agrees that Starburst is the NH State favorite, followed by M&M’s and then Snickers. Massachusetts and Maine rank #1 for…Sour Patch Kids? Mental Floss also ranks the worst candies, which include wax cola bottles (mmmm, wax), circus peanuts, candy corn, and of course – licorice. Yet Dads across America still secretly seem to like the chewy texture of black rope as it still exists! And not mentioned in the least favorite article – but surely deserve some mention – raisins. Sugar without the fun.

So, we ask you…what are your most (and least) favorite Halloween candies? We’d love to hear from you! Leave your comments below and have a safe and Happy Halloween!